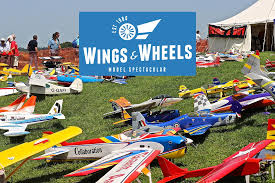 North Weald Airfield is a genuine WW1 airfield with many of its original buildings intact and it is at this wonderful venue that the Wings and Wheels Model Spectacular held it’s 33rd event in 2019.It’s hard to believe that one hundred years ago an airfield that was used by the Royal Flying Corps in 1916 provides the same venue for what is the longest running model show in the UK.  Those young WW1 pilots could never have imagined the changes that would take place in the world of aviation, let alone the fact that one day it would be possible to fly a model aeroplane at speeds they could only dream of and all controlled by a man on the ground holding a radio control transmitter!

Such is progress! And that progress is more than represented in the range of models on display, every era and type of model aircraft will be flown throughout the weekend from WW1 biplanes to the very latest fast jets. On the ground there will be every variation of radio control vehicles including trucks, tanks and model boats being put through their paces.

Couple this with a row of model Traders offering something to satisfy the most ardent of modellers, along with a giant Bring and Buy, there is more than ample opportunity to pick up a bargain!

Iconic One Theme | Powered by Wordpress